Posted on 26th May 2019 by Susan Rayner in Division C, Updates & Posts | Comments Off on A Welcome Challenge

When the time came several years later to make the effort to become a better public speaker Toastmasters was the natural choice. At Tube Talk Toastmasters Club there was ample opportunity to get involved and to help the club members grow and develop. Soon I was Sergeant, VPE, President and while fulfilling all these roles my public speaking skills grew as did my leadership skills and interest in toastmasters.

The public speaking skills I have developed have made it easier for me to share my life experiences and to inspire others with those experiences. The toastmasters experience have made me more comfortable in front of a large crowd – especially in that moment when all eyes go on me. I can much more easily stand in front of a crowd – and deliver. What’s more in a professional capacity I can more adeptly lead meetings and engage in a more poised manner in discussions with senior stakeholders. I am a more effective leader, listening better to colleagues and more enabled to give feedback in a more skillful way.

And so my involvement in toastmasters has indeed made me a more confident person, confident speaker, confident leader! And I am hoping it will be the same way for many others. That is why as Area Director I will be working hard to inspire clubs and influencing them to enhance their ways of working so as to build confident speakers and leaders. To enable clubs to grow in numbers and to help ensure they are committed to providing top notch education programmes for their members. This will also be an opportunity for me to apply strategic thinking and test my communication skills out. I am up for the challenge and looking forward to it all!

By No Means A Cult

Posted on 26th May 2019 by Susan Rayner in Division C, Updates & Posts | Comments Off on By No Means A Cult

I often hear Toastmasters referred to as being like a cult. When I first heard it described this way, I didn’t know whether that was a wholly positive thing.

When I hear the word cult, it springs to mind all of the ‘so bad they’re good’ movies which have sustained a cult following, such as The Room by Tommy Wiseau or Mega Shark Versus Giant Octopus (if you haven’t watched either, you really should.)

I then wondered why Toastmasters is spoken about in a similar light; are we a group of people intensely devoted to something which, from the outside, is hard to understand why?

The answer to that question is no. We’re certainly devoted to something, but it’s not hard to understand why.

Having been a Kings Cross Speakers member for a year I’ve been part of a community dedicated to bettering not only ourselves but every other member too. The devotion isn’t to a cheesy film but to being the best person we can be – not only at public speaking but also in building the confidence and self-worth that we all deserve.

Being part of a whooping, clapping, cheering and intensely supportive group has been one of the best decisions I’ve made. Thanks to this devotion I’ve experienced a year of enormous growth personally and professionally, and it’s easy to understand why.

Good succession planning in a club ensure the club’s longevity well beyond the departure of the current committee and make sure that the club can continue to grow, thrive and be run efficiently in years to come.

Good succession planning makes sure that all members of the incoming club committee/leadership team have been well equipped with the necessary tools, knowledge and data to lead the club in the upcoming year.

It all begins with the current leadership team/committee members starting to talk to club members (both new and longstanding) regarding taking on roles in the upcoming Toastmasters year.

The following excerpt is taken from the role guide I created for my successor:

“As you approach the second half of your Toastmasters year, it is a good time to start planning for succession within Early Bird Speakers.

Remind your team to highlight the benefits of being part of the leadership team in Early Bird Speakers as well as the expectation of members within to serve on the leadership team (TMI Promise #6 : “To serve my club as an officer when called upon to do so”)

Liaise with your Immediate Past President who will also be the leader of the nominations committee*. Working alongside a small team, they will organise any workshops, the nominations process and the elections for the club.

Invite your team members to look out for potential successors not only for their respective roles but also for other roles within the rest of the leadership team as well.”

Some clubs (particularly newly formed ones) with fewer members might struggle to appoint members to roles due to numbers.  Similarly, some members might stay on and serve in the same role for a couple of terms consecutively as the club grows. One way to alleviate ennui and prevent burn-out would be to ‘cycle’ the roles and have the leadership team members adopt different roles as they begin to ease in new members into those roles, whilst growing the club.

Any company worth their salt in the modern world has effective systems in place to make sure that future employees, whether temporary or permanent, have all the relevant information they need for the role.

Likewise, it is advisable for a Toastmasters club to create role guides so that successors to each role will have a guide to refer to during the year.

Role guides can include:

-Information about the role’s official responsibilities from Toastmasters International

-Information about the role specific to the club

-Day-to-day activity, at the club and behind the scenes

-Login details and passwords for any relevant software/accounts being used

Also, the guide can be accompanied by a pack containing items relevant for the role, for example:

-Financial documents to the new Treasurer

-Keys, keycards and other bits to the new Sergeant-at-Arms

The TMI website provides the Club Leadership Handbook that provides useful foundations on how to perform roles. A dedicated role guide for each role within your club will capture the nuances and you build upon it over time; adding and removing elements where necessary. If a role guide already exists, then consider how it can be improved upon.

April – Election preparation (depending on the culture of the club)

According to the official TMI Club Leadership handbook (attached), elections should be carried out on the first week of May. April is typically a good time to begin preparing for the elections.

The person to lead and organise the elections may also vary, though it is usually the Immediate Past President. The handbook provides information on how to conduct those.

Elections take place and the club committee/leadership team is elected into office.

After the elections, outgoing leadership team/committee members can begin the handover process; instructing the successor on what the role involves and other activity surrounding it such as Club Officer Training, etc

Role guide should be given to the incoming members along with the relevant official TMI documents.

The outgoing committee members can begin involving their successors with some of the tasks of the role so that when the time comes for them to fully take over on 01 July 2019, it will be more familiar.

Make sure that the names of the incoming team are submitted on the Toastmasters International website!

1st July and onwards – A new year and continued advice/support

Once the new leadership team/committee has taken over, this doesn’t necessarily mean that the outgoing team will abandon them!

The outgoing team members can serve as advisors and support for their successor, providing guidance as they get acclimatised to their roles.

I’d also like to add that it might be a good idea to think about succession from the moment a new member is inducted and to be sure that they appreciate the TM Promise rule 6 and why it is important for the whole club.

All going well, the cycle continues and your club will continue to flourish!

I wish you and your club all the best in your upcoming elections and that your club and the incoming team have a prosperous year ahead.

The plans for a London Club Growth Committee (LCGC) are coming together and my High Performance Leadership Committee is now in place.  I am now keen to find people to join the LCGC itself who I can empower to take the vision forward. 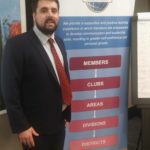 Some things are difficult for the formal setup to offer and my vision is for a less formal committee to support and supplement D91’s offering, acting as a one-stop-shop for new and struggling London clubs.  For instance, a possible activity for the committee is to compile a master list of London venues that are accommodating to TMI clubs, rather than the current situation of prospective clubs having to start the search from scratch.

END_OF_DOCUMENT_TOKEN_TO_BE_REPLACED

The highlight of the Division C conference, held at the prestigious London Business School in Regents Park on Saturday 8th April were the International Speech and Evaluation Contests. And the winners were
1. Ola Aralepo
2. Christina Alaby
3. Tom Donnelly And the winners were
1. Tazud Miah
2. David Saer

Check out details of the contests and the conference: http://d91toastmasters.org.uk/conference/