And So, The Show Went On

What does it take to bring the magic of theatre to life in this digitally distanced age? A talented cast of Toastmasters from five London clubs – Excalibur, Berkeley Square Speakers, City Limits, London Communicators and Early Bird Speakers – joined together to make it happen when they presented a musical play reading on May 30th 2021, complete with scenic ambiance.

It all started with a lockdown project in the Christmas of 2020, with an online production of J.B. Priestley’s ‘An Inspector Calls’ starring a cast of six. Calling for a cast of eighteen, ‘The Beggar’s Opera‘ upped the ante significantly, providing the perfect opportunity to satisfy the growing requests from Toastmasters keen to join us in our productions. 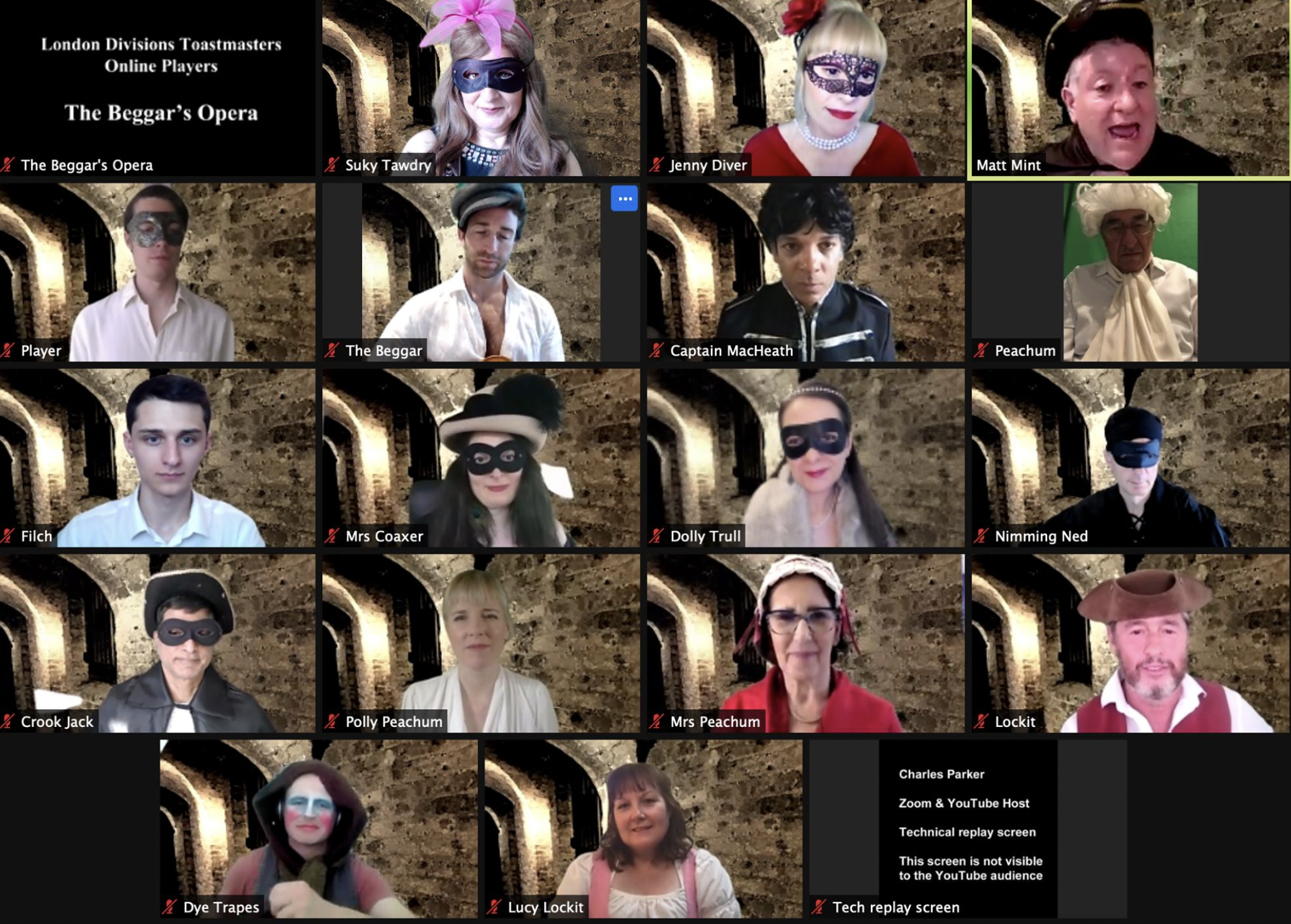 How do you create a brilliant theatrical experience from Zoom, free of the mishaps we’ve come to know and love (and loathe)? The Beggar’s Opera was a particularly technical undertaking involving strategic camera etiquette to bring actors on and off screen paired with skillfully managed YouTube livestream to provide our audience a live show without disturbance.

Creating a specially-adapted script – one that was tailored to a Zoom content unimagined in 1728 – was a crucial first step. Folk songs are central to the play, and choices had to be made about which of them would be included to bring the right balance and pace to the narrative. Our Manchester-based pianist Kathleen Hesford then created accompaniments for the songs plus an overture, and then, with the participation of some fellow professional singer friends, we each recorded our songs in traditional operatic styles for our cast to bring to life on screen.

On the technical side of the production, the landscape of our 18th century London was born through discussions with our virtual scenographer, Ilaria Vilkelis, who brought an artistic touch to create a suite of virtual backgrounds. Thanks to our Digital Production and Soundtrack coordinator, Charles Parker, who handled all things audio-visual, our cast could focus entirely on playing their parts, which also included some Zoom-adapted dance movements for the Tavern Scene devised by Olga Escribano.

When 18th  and 21st Centuries Become One

And what of my marvelous cast, some of whom hadn’t been in a play since their primary school Nativity? They got to grips with the language of 18th century London as they played Highwaymen, Pickpockets, Ladies of dubious virtue, Thief-catchers, Jailers, Actors and Beggars – all with great aplomb and an enthusiasm that warmed the heart of this producer as he coached them.

Through the magic of bringing our international cast together, 18th century London came to life – and even when one of our characters had a very 21st Century internet issue mid-performance, both he and the whole cast rose to the occasion and delivered a splendid performance. That’s what a strong community is about, and that’s what Toastmasters is about. 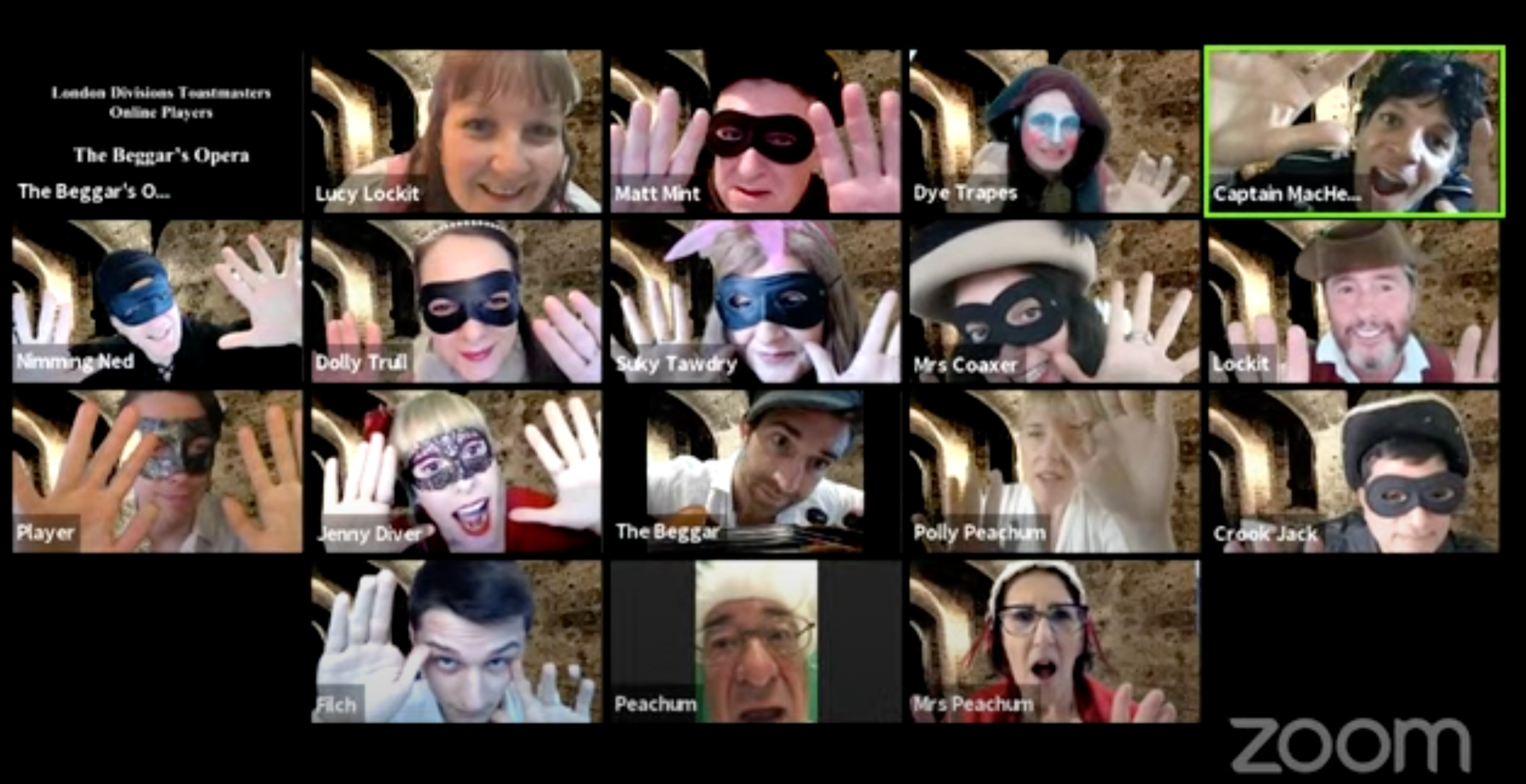 For many of us, COVID-19 has shaken up some of our most fond pastimes – and putting on a play is no exception. Yet, as The Beggar’s Opera shows, when there’s a will, there’s a way, and while the digital age brings its complications, there are also grand opportunities. You just have to be willing to take the dive and make it happen!

If you have any comments, please feel free to send them to toastmastersonlineplays@mail.co.uk