Take inspiration from Division A 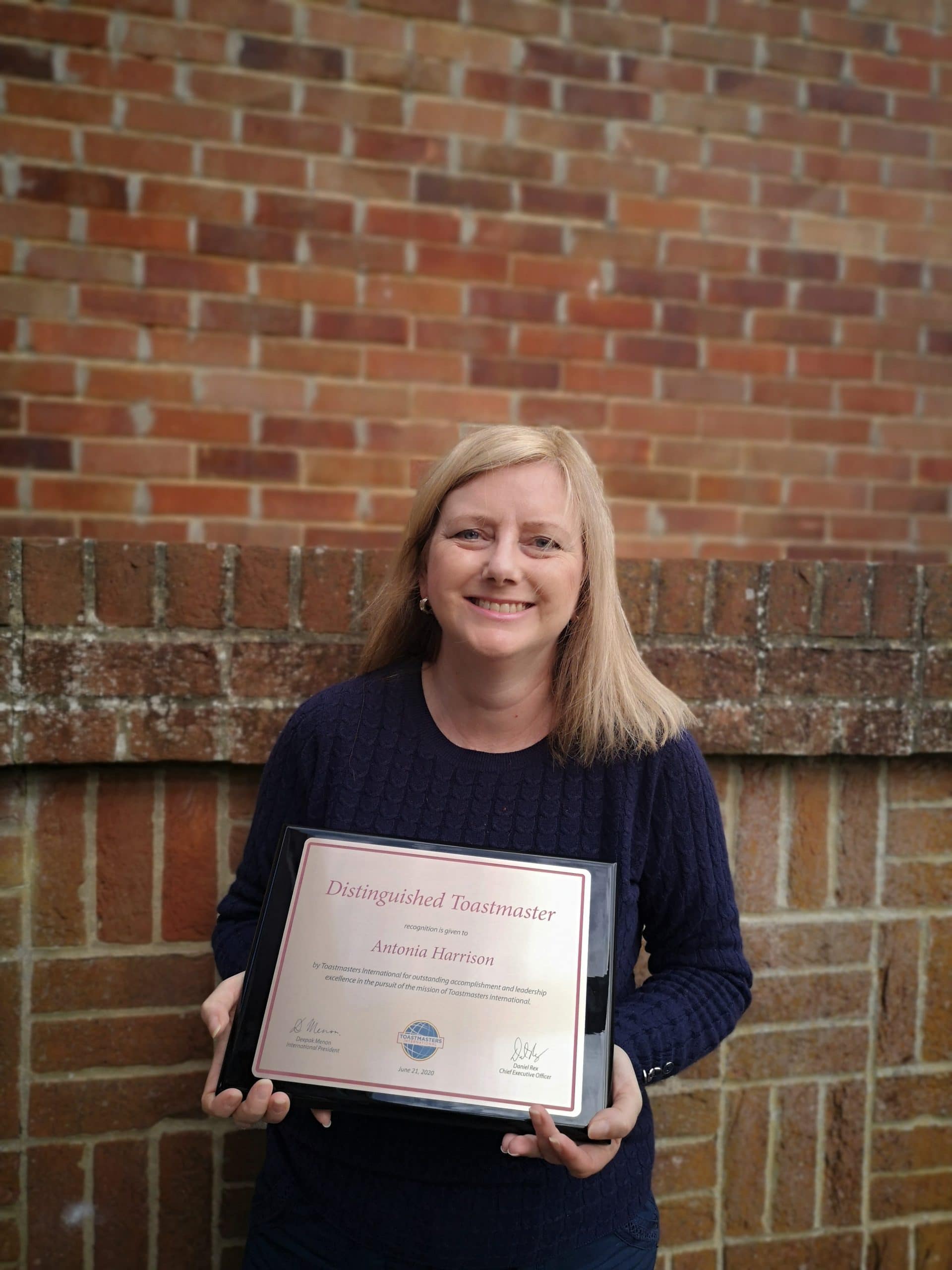 When not supporting her own club which she started in January, the other 20 clubs in Division A or visiting Toastmasters events around the world, Antonia focuses on her business as a Clinical Hypnotherapist and Breakthrough Business Coach for Women Entrepreneurs.  She stood for Parliament in 2017 and 2019.  Learning foreign languages is her lifelong interest as well as being on the water, preferably on a motor cruiser. 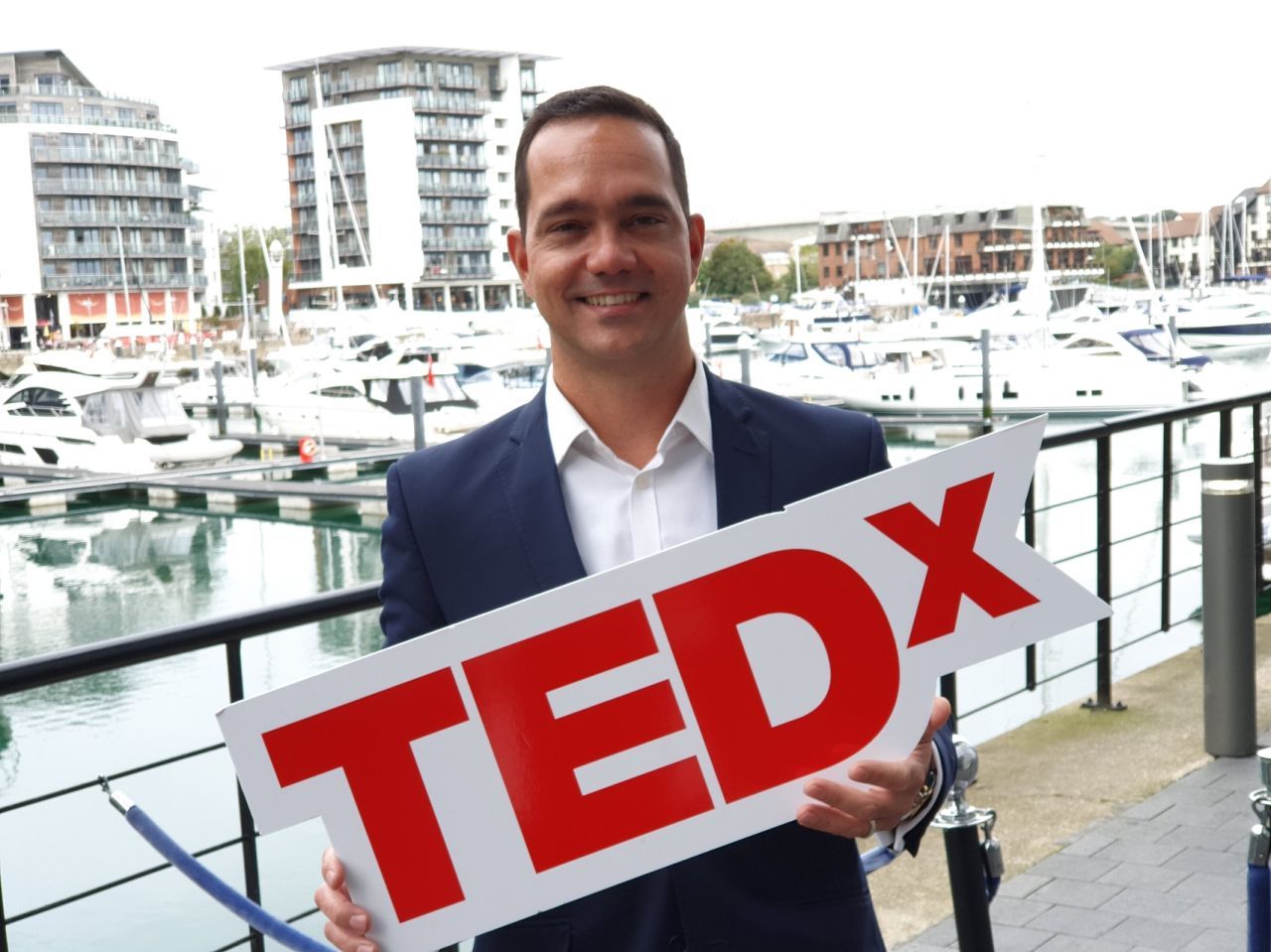 Russell Streeter ACB ALB, A1 Area Director and member of Solent Speakers in Fareham, will be speaking at TEDx Southampton in May 2021 deferred from 11 November 2020.https://tedxsoton.com/

This all-day event will feature creative, thought-provoking inspiration around our theme of Human to Human Connection in all its forms and includes a focus on Innovation, Connectedness and Personal Potential.

Russell is a finance leader with nearly two decades of experience in insurance and financial services. His outlook on life has been dramatically shaped by his family’s experience of childhood cancer. Russell’s talk is a powerful and emotional story about Human to Human Connection when a family member is seriously ill. He shares the important lessons he has learnt and discusses the vital contributions that everyone can make in such circumstances to save lives.

September 18th saw Salisbury Speakers host the 3rd in a series of panel discussions this year. This one was an exciting discussion on the subject of homelessness, with Salisbury MP John Glen, Salisbury Trust for the Homeless Project Leader Louise Davis, and Liz Dore, (Salisbury Speakers Member) of South West Advocacy Network, the new organisation she has just set up in Salisbury.

A series of questions were posed including ‘What lessons can we learn from the pandemic?’ and ‘” what will the end of the eviction ban mean for homelessness?’  A lively discussion followed, concluding with questions from the audience. Salisbury Speakers member Richard Livesey hosted the meeting very professionally, asking panellists to reflect on each others’ contributions and moving smoothly from one question to another.

Previous discussions were: September 7th ‘Perceptions of Influence in the Age of Social Media’, again hosted by Richard Livesey with panellists: previous Salisbury Speakers member Wendy Searle who famously made a record-breaking skiing solo to the South Pole in 2019/20 together with Richard Belle, a local Social Media expert and Barbara Saph, DTM Salisbury Speakers member. 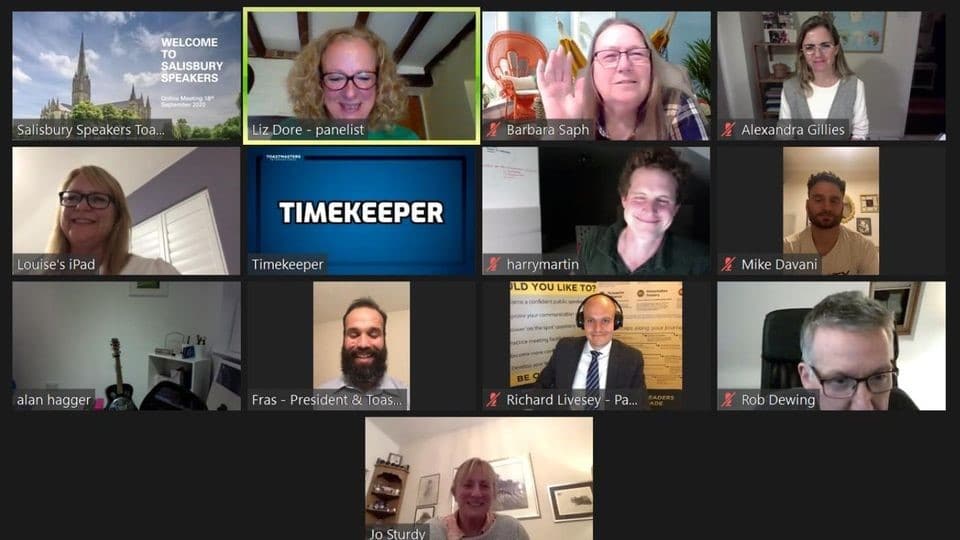 Finally, an in house panel of Rob Dewing, Alexandra Gillies, who works with sustainable tourism in Africa and Liz Dore discussed ‘Do You Think Plastic Should be Banned?’ on August 3rd.

Taking part in a panel discussion is very different to presenting to an audience, especially via a video conference but Salisbury Speakers are expecting to hold more of these during the year and will welcome members from other clubs.

Area 42’s only corporate club, Chaseside Speakers, a JPMorgan club, started their year off with a bang with a keynote speech from last year’s World Champion of Public Speaking, Aaron Beverley, a JPM employee from the States.

Chaseside is using the online format to its fullest by also joining forces with another D91 JPMorgan club to run joint meetings to boost the number of members at meetings and are looking to possibly extend the meetings to even further afield and branch out to other clubs for Global meetings.

David Matoe Club President is keen to have guest speakers and workshops to add variety and interest to meetings so would love to hear from anyone who has something they can share with the club.

At Bristol Central Speakers, we wanted to keep our high-energy and collaborative club culture alive even in the new virtual world. Taking advantage of the fact that any club in the world is now only a click away, BCS hosted a joint meeting with a club in Osaka, Japan. Separated by 8 hours in time, we showed up excited to meet the members of Naniwa Toastmasters. 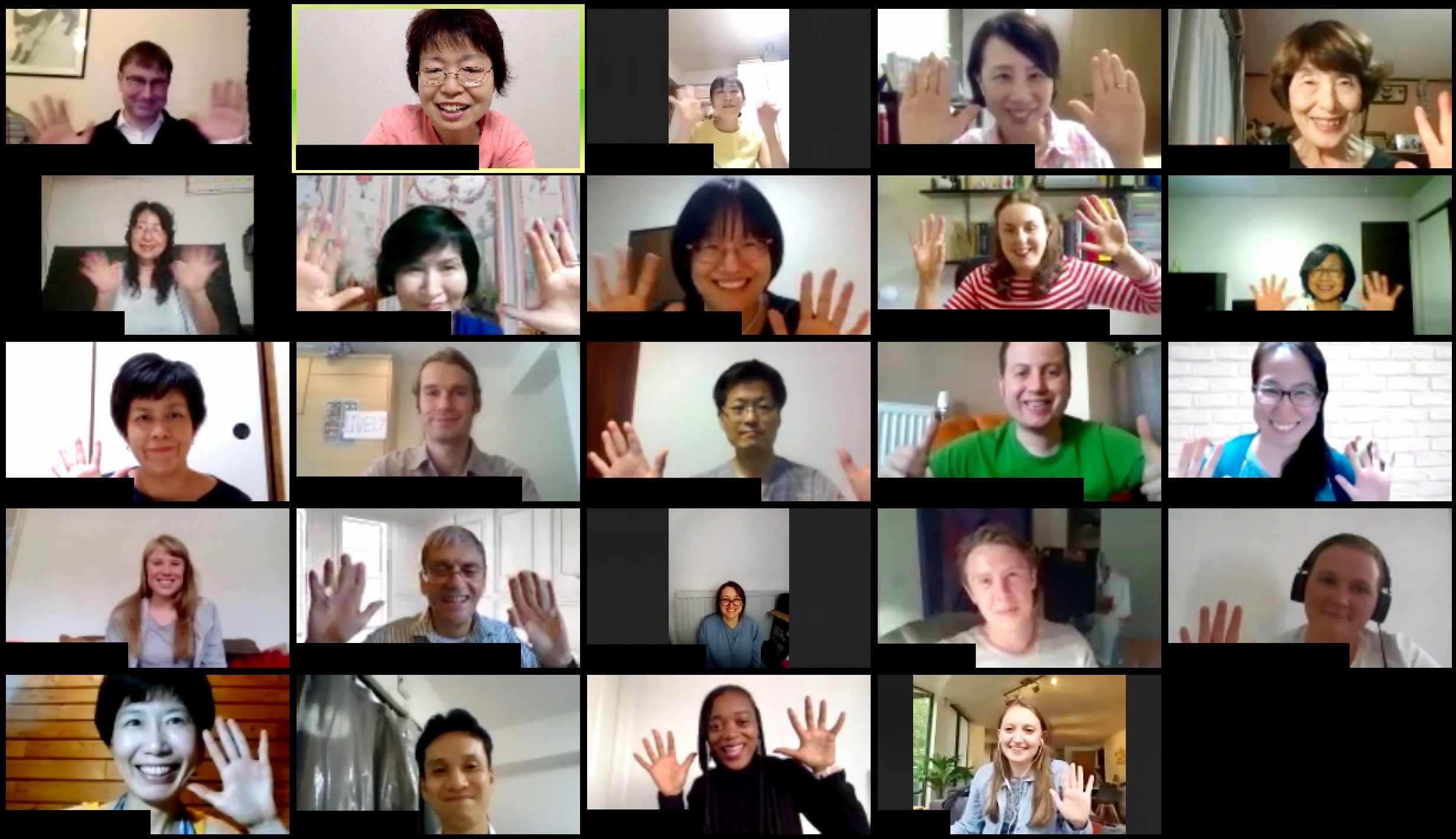 We quickly learned to add ‘San’ after everyone’s name and joked about not being disqualified for going overtime (Osaka rules!). It was an incredibly rewarding experience that showed us how we’re all so similar even though miles apart.

The feedback from our club members has been fantastic. This idea of a joint club meeting is all thanks to BCS’ Secretary, Polly Thompson, and has inspired us to keep exploring the world via Zoom. Who knows where we’ll (virtually) land next. 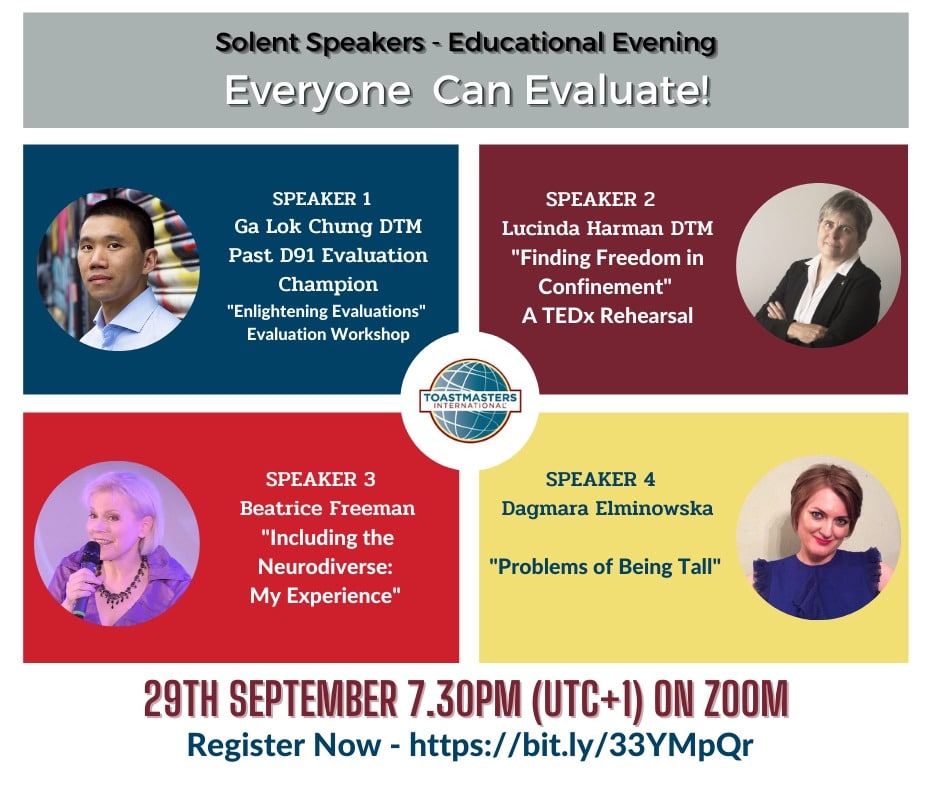 Solent Speakers (A1) ran an Evaluations event on 29 September starting with an “Enlightening Evaluations” workshop from 2016 D91 Evaluations Champion, Ga Lok Chung, teaching us valuable techniques including the COD and GLOVE methods. We then heard three very different speeches and offered a round-robin evaluation of each

42 people attended, included members from abroad. The full meeting is shown at: https://youtu.be/MmFZoAp63d8

Shilling Speakers “In Front of the Camera”

Shilling Speakers in Area A1 hosted a workshop with Luis Dorbecker DTM from Mexico called “In Front of the Camera” to help people with better lighting, framing, backgrounds, camera height etc.  It was particularly aimed at anyone taking part in Toastmasters contests.  You can see the recording at https://youtu.be/gaSPfwovYPc 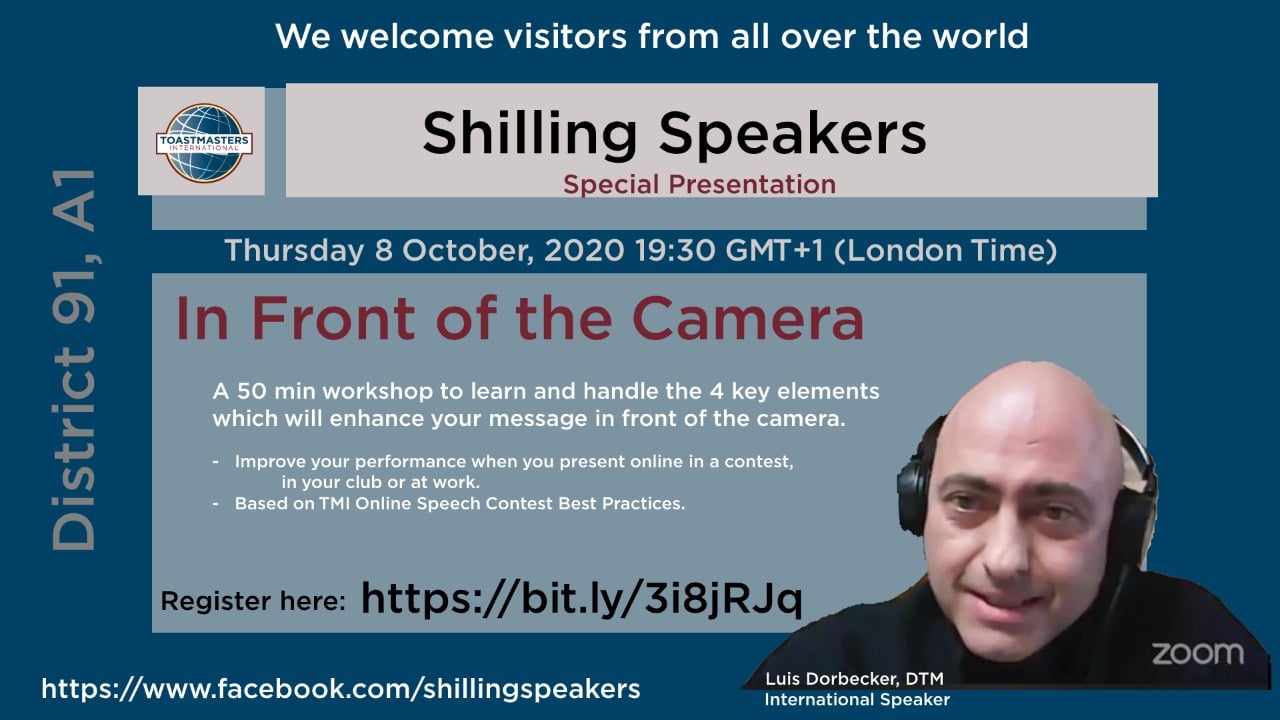 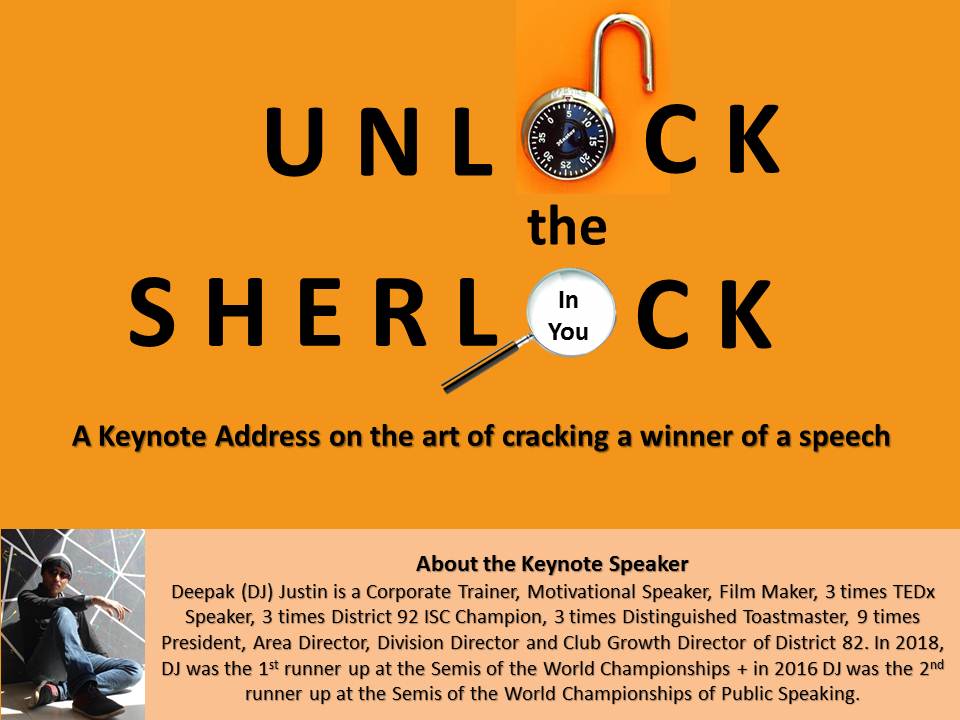 The Division Finals of the Humorous Speech Contest and Table Topics will include eight participants in each as Division A has four Areas.  Alongside, there will be keynote speeches from Gavin Meikle DTM on the hidden depths of Pathways and TEDx Speaker and multi-award-winning Deepak ‘DJ’ Justin from D82 with “Unlock the Sherlock: The Art of Cracking a Winner of a Speech”.

Celebrate our success with us

15 members of Division A achieved Distinguished Toastmaster (DTM) status in 2019-20.

Keith Oliver, Shilling Speakers and Spinnaker Speakers, Area A1, is the only member so far to achieve DTM in Division A this Toastmaster year.

Many congratulations to all 16 new DTMs!!! 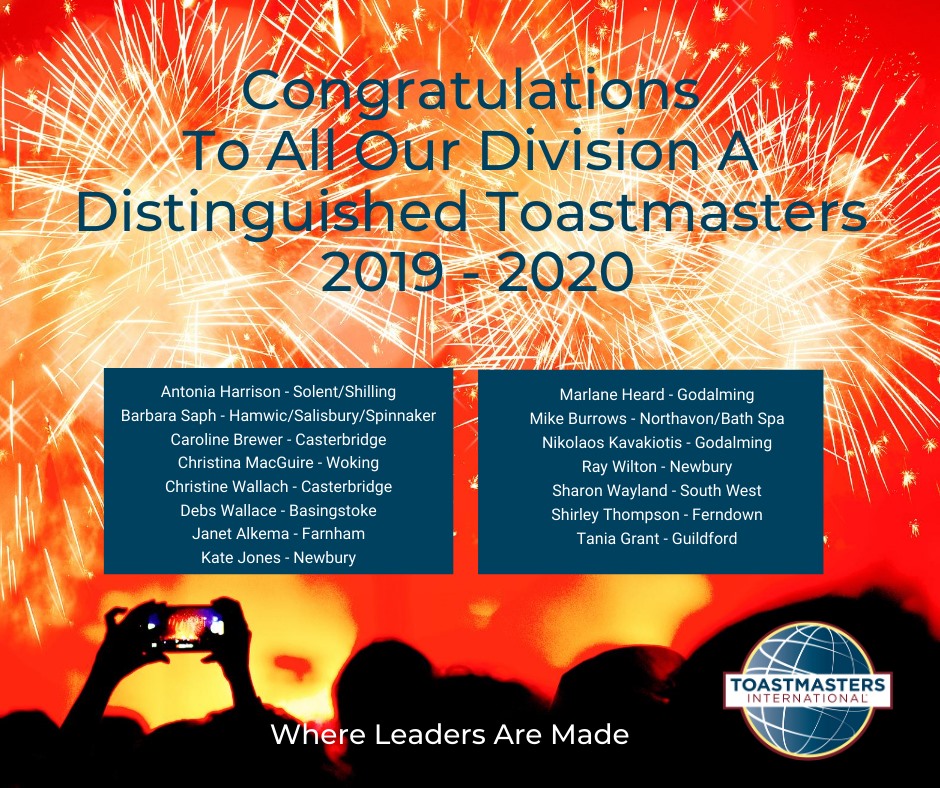 We have 42 other awards to celebrate