The Laughing Toastmaster: Winning isn’t everything. There’s losing too.

Like many of you, I believe that entering contests is about challenging yourself, no matter the outcome. As the experts say, ‘The biggest person you compete with is yourself’.

If that were true, it would be only ME participating in the contest, judged by ME and I’d crown ME the winner. Congratulations ME!

Imagine Mo Farah breaking his marathon record, doing his signature move in front of a mirror and saying, ‘Good job Mo! Keep this to yourself’.

Come on folks! Let’s get real here. Competing is about testing our skills against others to see if we are the best. I’m usually not. The best I mean. Sometimes I’m the worst.

Don’t get me wrong, I follow the noble strategy of ‘doing my best’, the problem is everybody else is ALSO doing their best, and their best is often better than my bestest best! Tongue twisters aside, I usually lose, which hurts and is quite embarrassing, as anyone who’s lost at cards to their own child will tell you.

All my readers out there (who by the way are 100% winners – just reading this makes you one), may be asking WHY I lose so much. 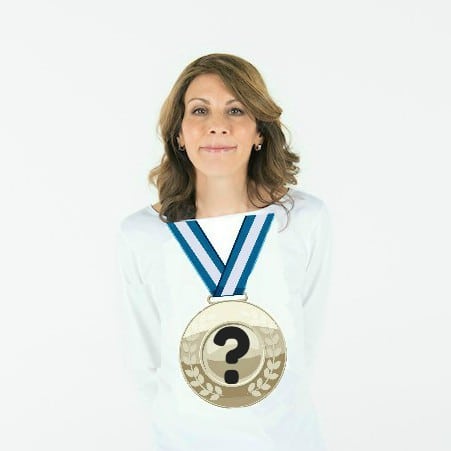 Well, my mum (mother hen) says, ‘Those judges don’t know anything! Don’t they know my daughter is wonderful?’

My Dad on the other hand, (PhD, engineer, mathematician) says it’s down to statistics, in other words the detailed analysis of past events. He reminds me that most competitors lose. In fact, EVERYONE that enters a contest (except for one) loses, because there can only be one winner. From the Oscars to the Olympics to the World Ironing Championships (very pressing), you need a lot of losers.

This is something contest organizers want you to forget. After all, they can’t really say ‘We have a winner! The rest are a bunch of losers!’ NO. That would be very bad for PR.  So inevitably they fail to mention this small (but fundamentally true) fact and go for the ‘don’t worry, be happy’ lingo. Also known as ‘Make sure those losers don’t start crying’. Again, bad for PR.

‘Everyone is a winner!’  Really? Then why isn’t everyone receiving first prize?

‘It was so close!’ No, it wasn’t. Otherwise it would have been a tie.

‘It’s all about enjoying the experience.’ If I was seeking enjoyment, I’d be in the bar drowning myself in a martini. Or two. Or three.

Which is where I end up after they announce, ‘…and the winner is…’ not me. Didn’t even place.

It’s not fair! After all that hard work! The fact is, contests aren’t always fair. The competitor who spends hours and hours preparing and deserves to win doesn’t, while the one with the smug smile who always takes first prize, wins. Again.

Which begs the question, why compete at all? Why not just cut out the ‘middle man contest’ and head straight for the bar?

Why compete? Because you can. There are only so many contests you can enter. For example, I’d love to race against Mo Farah but that’s unlikely to happen, not least because people say I run like a toddler, including arms in the air when I’m happy. I’d also like to compete for the Nobel Peace Prize, but I haven’t done anything peaceful lately.

The second reason for competing has to do with my Dad’s statistics. As he frequently reminds me, ‘If you don’t compete, there is only one chance at winning, and that is NO chance’.

Finally, why compete? Because as Toastmasters, we are not bystanders. The best this journey has taught me is that when it comes to life’s opportunities, never hesitate, participate.

Now if you will excuse me, I’m off to practice my winning (?) speech.

——— Sonia Aste, Riverside Communicators Club
——— She will be competing in the next Toastmasters’ contest. Her mum thinks she’ll win, ‘Unless those judges don’t know anything’.
——— More from Sonia on her website, Twitter, Facebook, Instagram