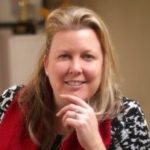 What’s going on this month,

END_OF_DOCUMENT_TOKEN_TO_BE_REPLACED

How to do a Club Success Plan..

Goals Goals Goals.. yes I know the Euros are on but those aren’t the sort of goals I’m talking about…

I’m talking about your educational awards, your progress in the Toastmasters Program.

Now, not everyone wants to set goals and I’m completely fine with that. One of the many wonderful things about the Toastmasters program is the fact that it is entirely self-paced. It’s up to you when you what to do something and there are lots of people who are quite happy attending meetings and just having a good time not concerning themselves with goals and progress and recognition (oh my!) 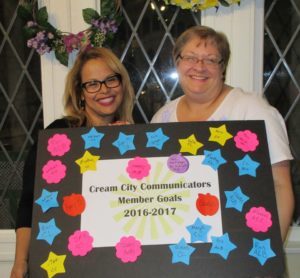 This idea is for members and club committees who do want to set themselves goals and do so in a fun way.

I spotted this idea on the The Official Toastmasters International Members Group on Facebook.  Many thanks to incoming VP Education Kathy Shine, DTM of Cream City Communicators, Milwaukee, Wisconsin, USA.

Her club completed Moments of Truth two weeks ago. They have already implemented several suggestions from our members and have begun to develop plans for further action that will be included in their 2016-2017 Club Success Plan.

One suggestion was to find a way to display member goals and progress in a non-threatening and non-embarrassing way for all members, and to encourage others who are taking a slower pace as they focus on building self confidence.

Their solution: they invited their members to sign their name and indicate their goal on a super-sticky post-it note, then placed them all on a large poster board marked simply as “2016-2017 GOALS.” They plan to have a second poster labelled “2016-2017 GOALS COMPLETED” and members can move their post-its from one board to the other in a simple recognition ceremony during a club meeting. What a great photo opportunity! 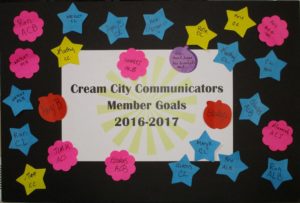 They have several fun, colorful shapes:

It’s a Club Success Plan on a poster board! Why not try it in your club? If you do, send photos to dltdistrict91@gmail.com.

Holborn Speakers are pleased to announce that the New Members Workshop will be taking place Tuesday 26 April 2016 at The Temple Bar Pub, WC2. 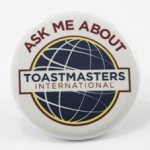 This fun and informative event is perfect for anyone who has recently joined Toastmasters or for members who would like to learn more about how to make the most of their Toastmasters experience.

Here are a few of the topics that will be covered:

Brief history of Toastmasters
How to make the most of the Toastmasters manuals
How to find support and a mentor
Setting goals for your Toastmaster year
…and much more! 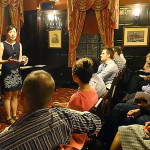 A president. A CEO. An astronaut. A Toastmaster.
What do all of these people have in common? They are women. Strong, invincible, inspirational.

In today’s business-centric world they lead some of the most successful FTSE companies. They are breadwinners, decision makers, and carers, influencing purchasing decisions and nurturing future generations. On the political scene, we witness them affect much needed change, impacting local and international policy and fighting for human and political rights, equality and freedom.

In honour of International Women’s Day, Berkeley Square Speakers (Area 9) are excited to host a meeting to celebrate this occasion. We invite you to join us on Wednesday 24 February 2016 at 7:15AM, at the Home of Phileas J. Fogg, Esq. (15 Bruton Lane, W1J 6JD) to celebrate the women in your life, and share your inspiring stories!

Register your interest by indicating your attendance on our club’s EasySpeak page or on Meetup.com (http://www.meetup.com/Berkeley-Square-Speakers/)

Ascot Speakers are all heart!

Posted on 4th February 2016 by Pedro Casillas in Club meeting ideas, Division H, Membership Building | Comments Off on Ascot Speakers are all heart!

Ascot Speakers are showing an innovative approach to their membership building campaign.

From 1 February – 31 March Toastmasters International clubs can participate in Talk Up Toastmasters.  Clubs can hold an Open House meeting to share what Toastmasters has to offer with a wide range of guests.  If your club gains 5 or more members during this period you get a Talk Up Toastmaster ribbon for your banner, a discount at the TM shop, and…most importantly…the satisfaction of knowing you’ve encourage more people to take their first step on their Toastmasters journey of learning and discovery.

And find out more about Ascot Speakers 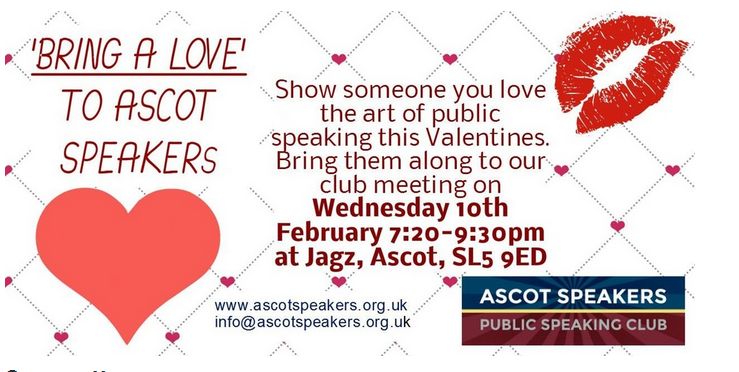