Excellence in the Face of Adversity! Leadership challenges 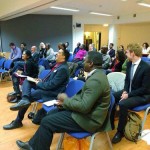 As we were preparing for the Area Contest, a boy approached me, his face awash with consternation.  “When are you going to be finished?”  I advised we would certainly be done by 10pm.  “But we are having Karate at 8pm in that room.”

“Let me look into that.”  I responded, with a smile.

We are often faced with challenges in our day to day lives and what we do in the face of a challenge speaks volumes about who we are.  The Speakers of Croydon leadership team confirmed we had booked the room, however, the Invictus Karate Club also had the room booked and the authorities of the venue were not able to be contacted to confirm and resolve the conflict.

Toastmasters from the leadership teams across the Area lept into action seeking alternatives.  You see, the Karate Club had to begin setup in the next 15 minutes and they had an inspector on the way from Milton Keynes . . . there was much at stakes for both groups!!!  We considered alternate venues in the area, other rooms, called local facilities.  In the end, we ran out of time, I announced to all that we needed to break down the room and we would reconvene upstairs to determine a plan of action.

As I was about to make my way upstairs to marshall the attendees together and establish a plan of action, the Karate instructor stopped me and pulled me aside.  He had found an alternative for his club meeting and he was going to cover the costs to shift his group.  Why?  “Because you have tried everything to find an alternative and resolve this, if it were anyone else, I would have just said no.”

I went upstairs and announced that we were back on track and we had a most excellent contest. The room was setup again in short order as everyone pulled together to get us back on track.  At the end of the contest, I thanked everyone for their demonstration of Toastmasters values of Respect, Integrity, Service and Excellence, it was because everyone came together and rose to the occasion to do the right thing that they moved the Karate club to go above and beyond to support us in having a celebration of excellence, not just of our contestants, but of the Toastmaster club members!