My Reflection on the 2018 International Convention in Chicago

Posted on 27th October 2018 by Susan Rayner in People, Updates & Posts | Comments Off on My Reflection on the 2018 International Convention in Chicago

In August 2018, to mark my year as President of Riverside Communicators, in Twickenham, I decided to attend the Toastmasters International Speech Convention in Chicago, Illinois, USA. 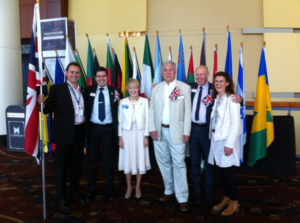 I felt privileged to attend Lark Doley’s  2018-2019 International President’s Inauguration and met with her and other Senior District 91 Leaders for a photoshoot.  I also enjoyed seeing Balraj Arunasalam’s outgoing Presidential Speeches on stage. These 2 events had even more impact when I received the September issue of the Toastmasters Magazine with Lark Doley’s Picture on the front page and then in the same envelope, I received my very own, Competent Communicators Certificate, signed for, by Balraj Arunasalam, International President and Daniel Rex, for having completed 10 Speeches in the Competent Communicators Manual, as I reflected, thinking, Oh Wow! I know those people.  I have met them. For me, alongwith the networking opportunities within this great family of Leaders and Communicators, 3 other things stood out.

1) The Toastmasters Opening Ceremony at the Convention, started with a Parade of Representatives bearing flags from 111 different countries.  It was such a colourful and moving Parade, rather like a Toastmasters version of United Nations.  We got to sing the American National Anthem, being the Host country, and the Sri-Lankan national Anthem, being the country of origin of the outgoing International President.

2) My own personal mini adventure: As I was self-funding and cost conscious, I decided to share a room at the Hi Chicago, Youth Hostel.  There were 4 beds to a room.When I woke up the first morning, I had left my Toastmasters magazine out, and one of my room mates, unknown before the trip, declared, “Oh wow! You are a Toastmaster, so am I.  She introduced herself as Sherrie Su, and told me that she was there representing China in the Competition.  She gave me a small Panda as a souvenir and our friendship was established.  The night before the Semi Finals, she and her husband, also a Toastmaster, were transferred to the Marriott Marquis & McCormick Place Hotels in Chicago and I received a text from Sherrie Su.  She had left her red shoes behind at the Hi Chicago hostel in our room.  I confirmed they were there and was happy to reunite her with her Red Competition Shoes.  What happened next, was beyond my wildest imagination, as Sherrie Su went on to come first in the Semi-Finals, and then went on to Win 2nd Place in the International Speech Competition for China! She was launched to fame and for a 2 hour period, everyone lined up to get photos with the winners.  I was not in the queue but 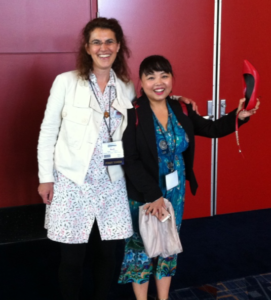 watched proudly from the side, she waved to me, with an extra big smile, saying, “Hi Ruth!”, and I got a picture with her and her husband at the end of the Photo session.

3) The third thing that stood out was the Credentials registration and training and subsequent exercising of voting rights as we got to listen to all the Candidates and vote in the new Toastmasters International Board.  I carried 2 votes for my club.  The voting procedure started at 7am and finished around 11am.  There had been opportunities to interview the candidates during the week in the Toastmasters International Store, where leaflets were also on hand, and I also stocked up on Club Ribbons to save on shipping costs.  On the morning of the Board elections each candidate read a 2 minute summary of what they planned to offer and why we should vote for them. I diligently used my 2 votes, by registering the number on a hand held device against my chosen candidates.  Between votes, whilst waiting for results there was music and people got up and were dancing in the aisles, at first it struck me as odd, but then I joined in and saw it like a large communal Toastmasters, early morning workout, that got the endorphins running!  Especially needed, since most of us, had skipped breakfast to attend by 7am.  I personally had set my alarm for 5:30 am that morning, as I was a short 20 minute bus ride away.It was a real buzz and sense of achievement. After all, we were all volunteers!  and on holiday!  I enjoyed attending the Presidential Ball, meeting Toastmasters from all around the world at Networking Lunches, attending educational workshops, my favourite being the one on bilingual clubs, apps and tools.  I’ve yet to revisit my notes, explore and put into practise and last but not least, it was amazing to witness so many phenomenal speakers and polished speeches.  I even became part of the Toastmasters video, when, in the midst of a pair work activity, got tapped on the shoulder by the Presenter and handed the microphone.  I was asked to say my name and where I was from.  I proudly announced that I was Ruth Ribeiro, President of Riverside Communicators, part of District 91 in London, England.

Whilst returning Sherrie Su’s red shoes might have missed me a Hall of Fame shot on stage, with the rest of the District 91 leaders as they collected Distinguished District awards, I not only managed to get in their photo with Lark Doley, the International President but also shared in Sherrie Su’s magic moment!