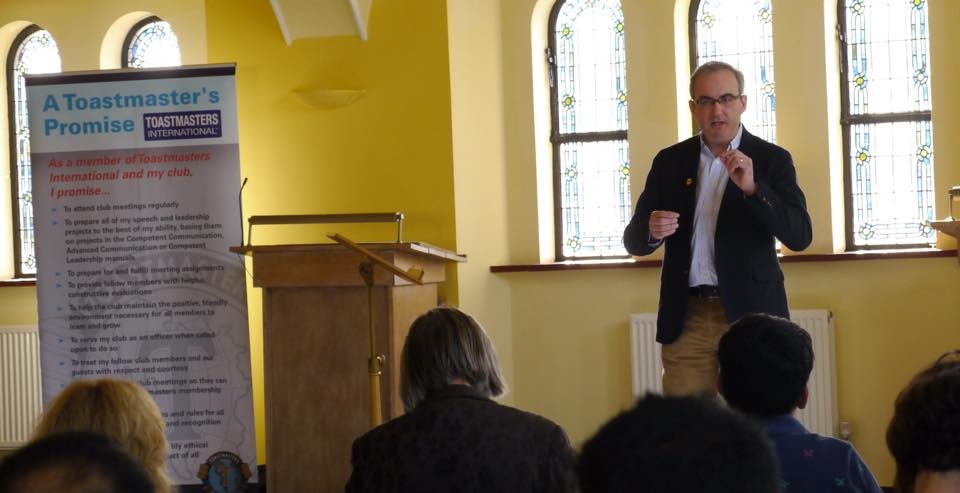 I know that you won’t believe this, or maybe you will, but when I was in my teens and early twenties I was young enough and arrogant enough to really think that I knew everything, I knew the best way of doing things, it had to be Plan A or in other words it had to be Plan Alan . It was all about meeeeeeeee!

A few hard knocks from life, and entering the world of real work, and I soon came to learn that to achieve your goals you must instead always go with Plan B, which was of course the BEST plan.  And that BEST plan was very often found and made to happen when other people were involved, in other words when you had have a team working at and making the plan a reality.

Knowing that I decided that when it came to being the Area 61 Governor last Toastmaster year it was not going to be based on a single person …. The vision was that the Governorship was to be a team effort.  The hope was that this approach would continue in the year ahead with the renamed role of Area Director.

How did we start?

The first step of in this was to be have two Area Governors which happened with, Steve Brewer, who had the formal title Assistant Area Governor but who was in reality a joint Governor.

The vision continued with the idea that the Area Governorship was to be a Team of people and much bigger than the two of us. We wanted huge support and input from as many of the Area members as we could get.

All of this focus on teamwork was very deliberate and gelled exactly with making my Area Governorship year the focus of Toastmasters High Performance Leadership Program (HPL).

By now you will know that it was this last aspect that formed a huge aspect of the program in action. Team building and having that team develop the ‘BEST PLAN’ and take the actions necessary to make the Area a success was both the vision and the goal.

HPL participation gives you formal feedback on your leadership skills through appointing a committee to monitor and offer advice from beginning to end. That feedback was used to improve my performance and the Area performance over the year.

For me the committee comprised both Steve & Coralie, and what was really great was that both of them were also working through their own HPL and knew exactly what was needed and how to help me progress with the program and our vision for the Area.

At the core of the HPL and its flexibility to fit in with your life and what YOU want to achieve. It can be focused on achieving something within Toastmasters as I did or on something within your community as Steve did or your work as Coralie did.

Steve’s program was focused on helping a youth football team improve and develop and Coralie’s developed a novel way of providing performance feedback to lecturers with the goal of enhancing their abilities.

A big part of the HPL and why it fitted so well with my idea of the Area Governorship is that you have a team help you in setting and achieving goals. When Steve and I sat down to decide what we wanted in the Area we perceived a vision and a draft plan and set this out in writing for the whole Area Team to review and agree on.

This had to be their vision, their plan, their goals, and therefore something that really would belong to them so that they would be motivated to act on it. This draft plan was recorded in the programme manual and included the idea that to coin a phrase … “we would all have a laugh that year; this was to be an entertaining year”.

The Area Team formally met 4 times in the year to review the vision, amend the plan, set goals, monitor and adjust as needed …..Of course we met or spoke on many other occasions as well and I, Steve and Coralie also had a detailed dialogue based on the five projects within the program. The result of the HPL and the creation of the Area Team resulted in us having brilliant Club Officer Trainings, Competitions, Educational Sessions, and Social Events and a “laugh”.

We ended the TM year with many, many of the Club Officers and members working their way through both the Communicator and Leadership Tracks and achieving their personal goals and with many of the Distinguished Club Program goals achieved.

Should you do it?

Let me let you into a secret …. No one in Toastmasters has to do anything, no-one can be ordered to do anything as we have no formal power in the way someone might have in a work situation. We are all volunteers, and so to deal with that aspect of things we use a Leadership style known as ‘Service Leadership’. We are there to serve and help each other improve. Look it up, it’s a bit like learning how to herd cats … in a nice way …….. and it’s a skill really worth learning.

The Area 61 Governorship, and my interpretation of the High Performance Leadership Program, was based on that understanding. The combination of its five projects did, I think, make a positive difference to the Area that year. The whole Team did a lot of good work in helping our members improve their abilities and we did have that “laugh” along the way.

I can hear you ask, is it worth me working through the Program? Will it have a benefit?

For me the answer is a resounding yes!  I’ve taken much into my own business, including the idea of service leadership, which is of great value as a consultant dealing with some very difficult company situations over which I have no formal power so to speak.  When you speak to Steve & Coralie and ask was it worth it for them you get the same resounding answer.

Would it work for you?

Give it a go and see, and remember YOUR project can be almost anything ….