What a Day, What a Conference! By Paul Rhys-Taylor

Posted on 8th November 2017 by Susan Rayner in Autumn Conference, Updates & Posts | Comments Off on What a Day, What a Conference! By Paul Rhys-Taylor 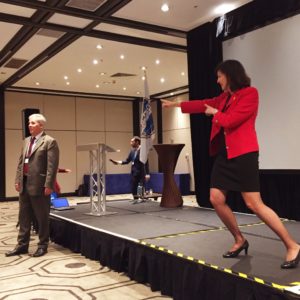 Our last Autumn Conference was held at Gatwick Airport. This one-day event was packed full of value to inform, educate and entertain members and guests from across the District and beyond. Next year, districts will only be required to hold one annual conference, the Spring one in May.

As the Conference was held at Gatwick Airport it had a flight theme and by the end of it we were flying high. The keynote speech was brought by Aletta Rochat who flew in from South Africa to join us. Aletta is the Region Advisor for Europe, the Middle East and Africa for Toastmasters International – and what an inspiring and affirming keynote it was! Aletta described and gave value to a range of essential service leadership qualities and then she invited District Director Pedro Casillas, to recognise members in the room who exemplified each one. There were also edifying Communications and Leadership workshops run by well-respected district leaders. 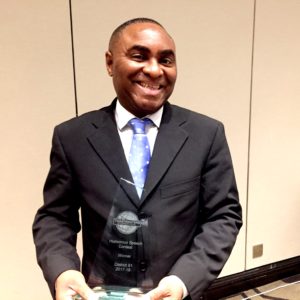 After the workshops came the first of two exciting District contests: the final of the Humorous Speech Contest which started off at club level in late summer. Contest Chair Glen Savage warmed us up well with his unique brand of side-splitting humour. We were then treated to a fine crop of highly original and entertaining speeches. The judges’ pick for winner was Ola Aralepo of Tube Talk Toastmasters, with his speech titled ‘The Right to be Right’, which saw him don his high vis railway worker’s vest to relive his enounters with condescending customers. Warren Sheng  of London Business School Toastmasters, took the runner-up position after he schooled us on ‘The Benefits of Having Three Personal Pension Plans’… namely his three sons! The audience soared to laughter’s heights. See previous winners here. 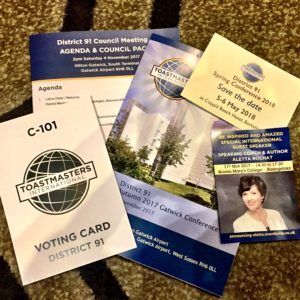 The levity continued into the lunch hour, before the afternoon business of the District Council meeting. Optional yoga sessions were provided for Conference attenders not joining the Council meeting. Voting members of the Council include our Club Presidents, VPEs, Area Directors, Division Directors and the District Leadership Team (DLT), comprising the Trio and the support leaders. The main items for the Council to consider were: the Year-end Audit Report 2016/17; the Finance Manager’s presentation of this year’s budget; District leader updates on how their work is contributing to the District Success Plan; an update on Pathways; an update from Toastmasters International; and a look toward future conferences and confirmation of the appointment of a Conference Chair to coordinate these.

After the Council meeting came the Table Topics Contest final and what an apt scenario Contest Master Wendy Benson raised to launch the finalists into competition mode! As Gatwick employees they were to explain to their passengers why their flight being delayed was a good thing. Such skilful responses; an impressive level of quality. The judges’ pick for winner was Mark Hanley of EarlyBird Speakers, whose characterisation of a slithering airport spin doctor was highly accomplished. Chris Boden of Maidenhead Speakers, claimed second place – this, his third consecutive appearance in a Table Topics contest final. See previous winners here. 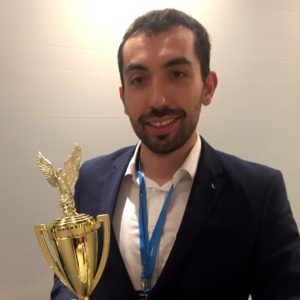 With awards and congratulations bestowed on the winners, and pictures taken and posted across social media, the time came to close the Conference. The Conference Flag passed to the Spring Conference Director, Helena Brewer  of Aylesbury and Wokingham Speakers; she will be hosting the District in Coppid Beech, Berkshire, on the weekend of 4th to 6th May 2018.

Huge congratulations were heaped onto the Gatwick Conference Director Filip Balota and his team for a smooth take off, excellent in-flight care and attention, and an equally smooth landing. We also recognised the dedication of Gordon Piggott, Andy O’Sullivan, Catherine Cannon, Arnaud Sartre, Rick Cooper, and Steve Vear, for their outstanding contributions to Toastmasters and entered them in the Hall of Fame.

Fellow ‘travellers’, if you enjoy the value you get from your club meetings and you’ve never been to Conference, I would highly recommend you plan your trip to Coppid Beech. There’s so much more value to be had at District Conference … more Toastmasters, more talent, more networking, more speeches, more leadership opportunities, more inspiration, more fun … and more time.

PS See a sample of our speakers and see what the audience thought of the conference.